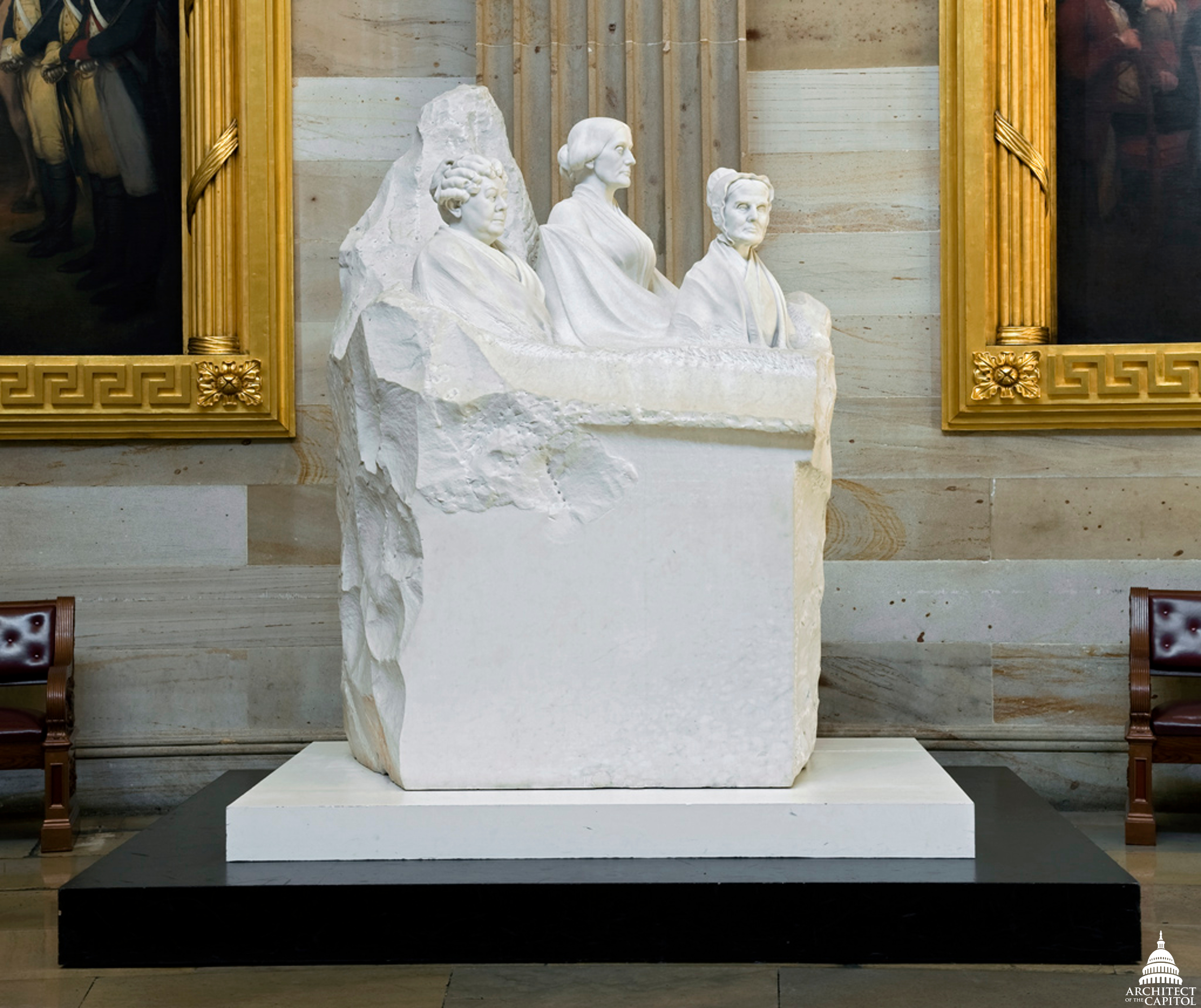 1In the Rotunda of the United States Capitol, surrounded by sculptures of leading men in American history, an unfinished statue was displayed in 1921. It honored three women with Massachusetts connections who were instrumental in securing the vote for women, Elizabeth Cady Stanton, Lucretia Mott, and Susan B. Anthony. Two days later the statue was removed to the Capitol basement.  2Then, Congress ordered workers to scrape off the statue's ''blasphemous'' feminist inscription, which, in gilt, had hailed: ''Woman, first denied a soul, then called mindless, now arisen, declared herself an entity to be reckoned.''  100 years ago empowering more than half the population was seen as an insignificant milestone by many members of Congress.

Of the great reform movements in American history, the struggle for women’s suffrage was often overlooked. Even today it may be assumed that the idea of “votes for women” was not controversial by the twentieth century. In fact, winning the vote required a prolonged struggle against determined resistance over several generations. Like any great movement, there were strong personalities and differences of opinion on tactics. Some favored state by state efforts, others pursued a federal amendment. Suffragist parades introduced an inspiring theatrical quality to the movement. 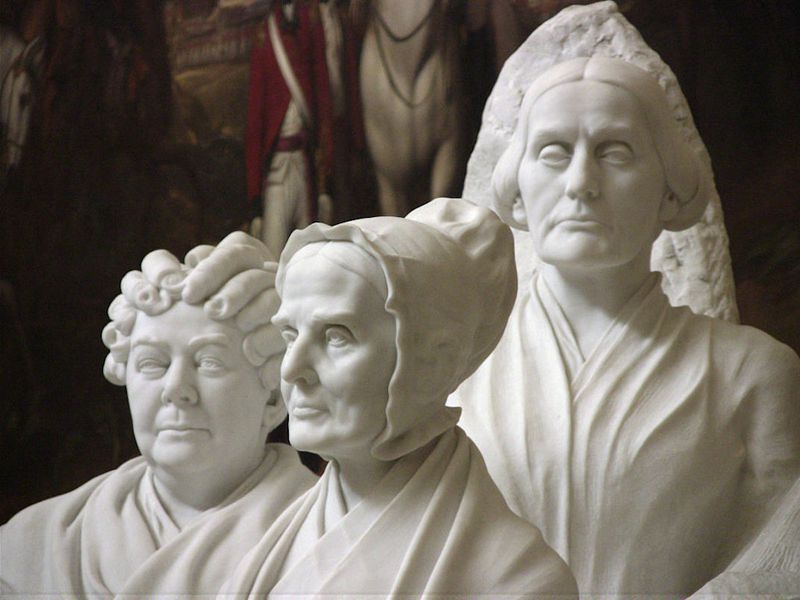 In Washington, D.C. mobs attacked suffragists as police stepped aside. Some activists were imprisoned, injured in jail, and force-fed. Finally, in 1920 the Nineteenth Amendment to the United States Constitution was ratified guaranteeing women the right to vote.

The statue wasn’t returned to the Capitol Rotunda until 1996. The story of the struggle for women’s suffrage is also taking its place among the great themes in American history.

3The group portrait monument to the pioneers of the woman suffrage movement was sculpted from an 8-ton block of marble in Carrara, Italy, by sculptress Adelaide Johnson.

The monument was presented to the U.S. Capitol as a gift from the women of the United States by the National Woman's Party and was accepted on behalf of Congress by the Joint Committee on the Library on February 10, 1921, on the 101st anniversary of Susan B. Anthony’s birth.

4 Aside from the fact it's the only monument to women on display in the rotunda, there's something else that's unique about this work. It appears unfinished. Most notably, Johnson left a large piece of rough-hewn marble in the back of the statue. Her motive has been debated over the decades. Did she want her monument to represent the unfinished quest for women's equality? Was it representative of future, yet-to-be women's rights leaders, "a kind of an unknown soldier of the woman's movement?" 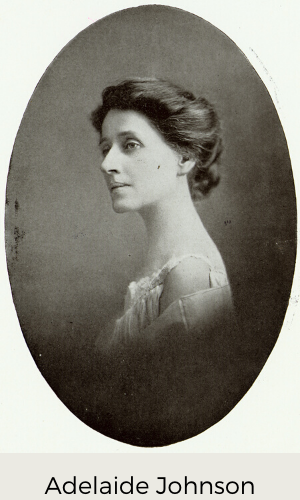 It is a possibility that the unfinished marble could be sculpted into the likeness of the first US woman president, that's a fact that has not been confirmed. A Senate bill in 2004 seeking to add the face of African-American civil rights activist Sojourner Truth died in Congress. An official with the office of the Architect of the Capitol told The Desert Sun no bust is planned for the unfinished marble because there's not enough room for one.

Regardless, the history of this piece is fascinating and is truly symbolic of the unfinished business of the centuries-long push for women's equality.

5The problem of visible representation has been noted on numerous occasions. There are the 100 statues in Statuary Hall, a room in the Capitol where two statues of prominent citizens come from each state. Only nine depict women. No park in Chicago has a statue of women, reported the local NPR affiliate in 2015, and just five of the hundreds of statues across New York City portray historic women, according to CityLab. A survey of outdoor sculpture portraits across the country found that only 10 percent portrayed historical women figures, and of the 152 National Monuments listed by the National Park Service, only three are dedicated to historic female figures.
But with the Portrait Monument celebrating its 23rd year of being out in the world, there’s plenty of reason for optimism. “The Rotunda is the heart of our nation. When it’s filled with statues of men, it gives an inaccurate view of who we are as a nation. It undermines women’s role. They’ve given birth to our nation, literally and figuratively. For what it’s worth, the statue still doesn’t have the original gilt inscription."