Emma Gonzalez is an American activist and advocate for gun control. As a high school senior she survived the February 2018 Stoneman Douglas High School shooting in Parkland, Florida, and in response co-founded the gun-control advocacy group Never Again MSD.[6]
González first drew national attention after a speech she gave at a rally against gun violence went viral, famously proclaiming "We call B.S." on the lack of action by politicians funded by the NRA. Subsequently, González continued to be an outspoken activist on gun control, making high profile media appearances and helping organize the March for Our Lives, which became the largest student protest in American history. Speaking at the demonstration, González led a moment of silence for the victims of the massacre; she stood on stage for six minutes, which she observed was the length of the shooting spree itself.   Wikipedia – Emma Gonzalez/Photo - Sun Sentinel

Naomi Wadler
Today’s March for Our Lives protest, which calls for changes to America’s gun laws and resulting epidemic of gun violence, saw a bevy of powerful speeches and performances occur across the nation. (Speakers included Parkland survivor Emma González, while celebrities Miley Cyrus, Ariana Grande, and Demi Lovato all performed.) But perhaps nobody made more of an impact than the 11-year-old activist Naomi Wadler, who won over the crowd in Washington, D.C. by delivering an emotional statement that was wise beyond her years.
Wadler—a fifth grader from Alexandria, Virginia, who also led a walkout during the National School Walkout on March 14—spoke out not only demanding gun reform but also calling for an acknowledgment of all the black girls and women who have fallen victim to gun violence and gone unrepresented in the media. “I am here today to acknowledge and represent the African-American girls whose stories don’t make the front page of every national newspaper, whose stories don’t lead on the evening news,” Wadler said in her speech. “I represent the African-American women who are victims of gun violence, who are simply statistics instead of vibrant, beautiful girls full of potential.”
Like many students leading the movement, Wadler also emphasized the importance and power she and her fellow youth will hold when it comes time to old enough to vote. “My friends and I might still be 11, and we might still be in elementary school but . . . we also know that we stand in the shadow of the Capitol, and we know that we have seven short years until we too have the right to vote.”    *  VOGUE.COM March 24, 2018, Christian Allaire/Photo IOL 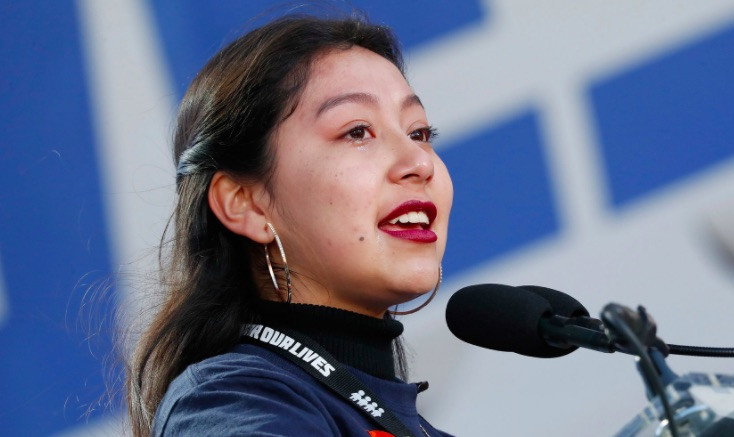 Edna Chavez, a South Los Angeles resident, spoke to the march in Washington, recalling the day her brother was killed.
She remembers seeing the “sunset going down on South Central” and hearing the “pops, thinking they’re fireworks.”
“Ricardo was his name,” Chavez said, asking the crowd to say his name. “Ricardo! Ricardo!” the crowd chanted in unison.
“I lost more than my brother that day. I lost my hero,” Chavez said.
Earlier in her speech, Chavez talked about the normalcy of gun violence in her neighborhood. “I’ve learned to duck from bullets before I learned how to read,” she said.   *LOS ANGELES TIMES/Photo HipLatina

Yolanda Renee King
“I have a dream that enough is enough.” Nine-year-old Yolanda Renee King invoked the famous words of her grandfather Martin Luther King, Jr. – and gave them a 2018 twist – as she spoke to the tens of thousands of protesters demanding gun control at the March for Our Lives in Washington, D.C., Saturday. Yolanda spoke on a similar platform as her grandfather, Martin Luther King did 55 years earlier when he inspired generations with his historic “I Have a Dream” speech at the march on Washington in 1963.
“My grandfather had a dream that his four little children will not be judged by the color of the skin, but the content of their character,” said Yolanda, standing alongside Parkland shooting survivor Jaclyn Corin. “I have a dream that enough is enough. And that this should be a gun-free world, period.”

“Will you please repeat these words after me?” Yolanda asked the crowd. “Spread the word, have you heard? All across the nation, we are going to be a great generation.” But one repetition of her rallying cry wasn’t enough. “Now, I’d like you to say it like you really, really mean it,” Yolanda said before launching into the affirmation once again.     *  TIME.COM March 24, 2018, Jennifer Calfas/Photo VOA News